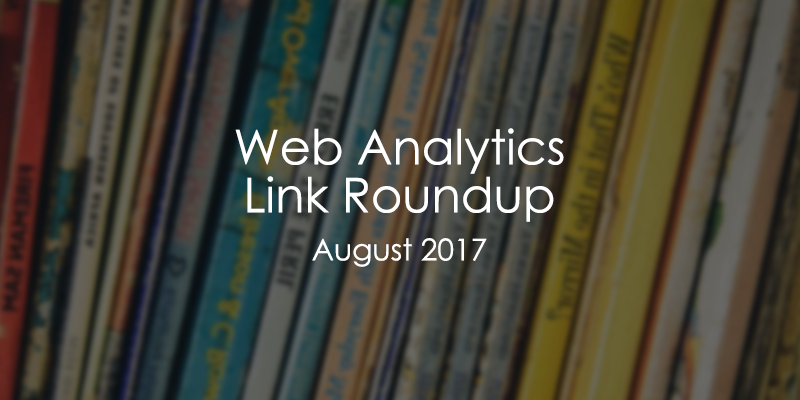 Wow, time flies fast! Another month has passed, so let’s see what other bloggers/companies have published online. These are the posts that were my favorites in August. Web Analytics Link Roundup is starting in 3… 2…. 1….

In the beginning of August, Google announced it supports a bunch of new languages. You can find a full list here.

To be honest, I doubt that there will be a single Web Analytics Link Roundup post without Simo’s content. This time, he teaches how to capture a value of a selected drop-down list option. The blog post is brief and includes a custom auto-event listener. It won’t work out-of-a-box, thus you’ll need to do some minor modifications (define a CSS selector).

In yet another post, Simo shares his two add-ons for Google Sheets which will automate a couple of menial, manual tasks: Google Analytics Validator and Google Analytics Custom Dimension Manager.

So far, you’ll need to implement it via Custom HTML Tag in GTM because a default tag template is not available yet.

Julian has published a Google Apps Script that allows you to audit and rename your Tags, Triggers, and Variables within a Google Sheet.

A better alternative to excluding filters in Google Analytics

Lunametrics folks suggest a different way of filtering data in GA. Instead of using GA filters, Jon Meck recommends blocking the unnecessary data with GTM, before it even reaches Google Analytics servers. This way you’ll have a lower chance of reaching property’s hit limits or sampling limits.

The author lists several reasons why heat maps might be misleading. You’ll get the idea after you read the Lukasz’s post.

That’s it for this month’s Web Analytics Link Roundup. See you next month. If you’ve missed previous editions, go check them here (so far there two posts in total, but the number will eventually increase).