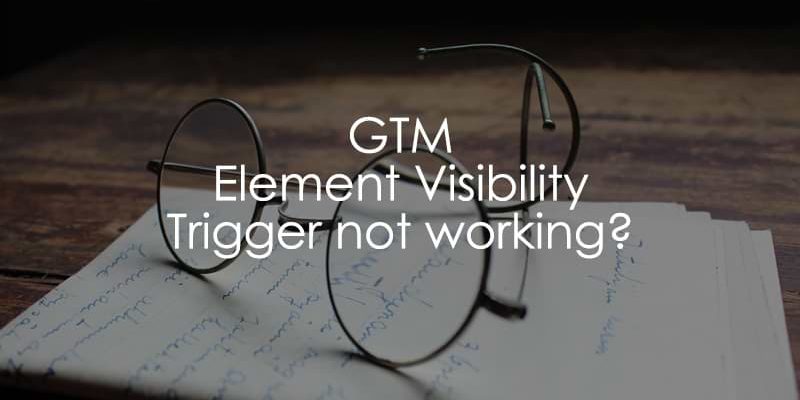 Element Visibility trigger is one of my favorite things in Google Tag Manager. Whenever an element appears on the screen (after scrolling or some other interaction), you can use that as a condition to fire your tags.

One of the use cases is form tracking with the Element Visibility trigger that I use when other form tracking options are not working properly. However, there are several tricky things you need to know about this trigger, otherwise, you might get stuck.

In this blog post, I’ll mention several reasons why Element Visibility Trigger is not working in Google Tag Manager (and how to fix that).

The trigger contains a very powerful checkbox, called Observe DOM Changes. It must be used depending on how the element appears on the screen.

If you expect an element to appear on the screen after scrolling, then KEEP THIS CHECKBOX DISABLED.

If, on the other hand, a particular element appears on the screen without scrolling (e.g. a popup just jumps onto the screen), then the Observe DOM changes checkbox must be enabled. 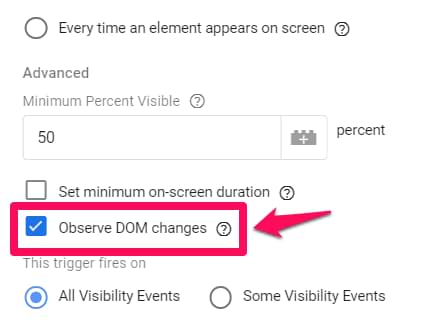 When you use the Element Visibility trigger, you need to instruct Google Tag Manager which exact elements are you interested in. Currently, there are two selection methods to choose from:

If an element (that you want to track) contains an ID, use the first option. How can you know whether the element has an ID? Do the right-click on it > Inspect and check that. Here’s an example of an element that contains an “id” attribute.

The tricky part comes when people start using a much more advanced option, called CSS Selector. To be able to use it, you need to know at least the very basics of it. Here’s a good resource to start. I HIGHLY recommend that you read that guide before using CSS Selectors in your Element Visibility trigger.

Speaking of the most common mistakes I’ve noticed among those who are just starting:

To learn the most common use cases for CSS selectors, head over here.

Another example of a common mistake is when GTM users select the ID selection method but try to enter CSS selector in the field below. 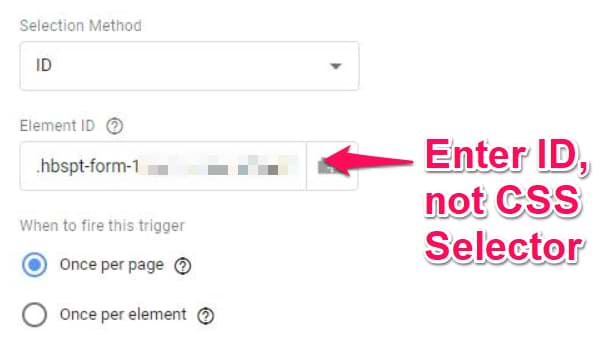 If you select the ID method, then just enter the ID (without dots or anything else). If you try to enter a CSS Selector, then change the Selection Method to CSS Selector. Looking at the screenshot above, looks like that’s a CSS selector (because a dot must be added in front of a CSS class).

Once again, read this guide if you are not familiar with CSS Selectors for GTM.

This case is not met very often but is still worth mentioning. In fact, that’s something that I was reminded of quite recently. Here’s my case:

There were a bunch of embedded forms (in an iframe) on a website and we wanted to track the moment when they appear on the screen. For some reason, instead of adding some additional attributes to the iframe window, he added a <div> element with a certain value right above that iframe.

Even though such an element (<div>) exists on a page, there was no style assigned to it, meaning that the element was kinda invisible to a regular visitor and that div’s height is 0px.

When the element’s height is 0px, the Element Visibility trigger will not capture its appearance because, well, that element is still invisible.

What’s the solution? Ask a developer to set that element to be at least 1 or 2 px high. There are various ways to achieve that, for example:

From what I’ve seen, these issues are the most popular when it comes to the Element Visibility Trigger not working in Google Tag Manager.

If none of these tips helps, most likely, it’s the issue #2 that you are dealing with (not knowing CSS Selectors well enough). To solve that, I highly recommend reading Simo’s guide.

If that does not help, let me know in the comments and I’ll take a look. Just please, don’t forget to provide as much information as you can. If you want help, you need to put some effort into describing the issue. Here’s a blog post that will help you get better GTM help.