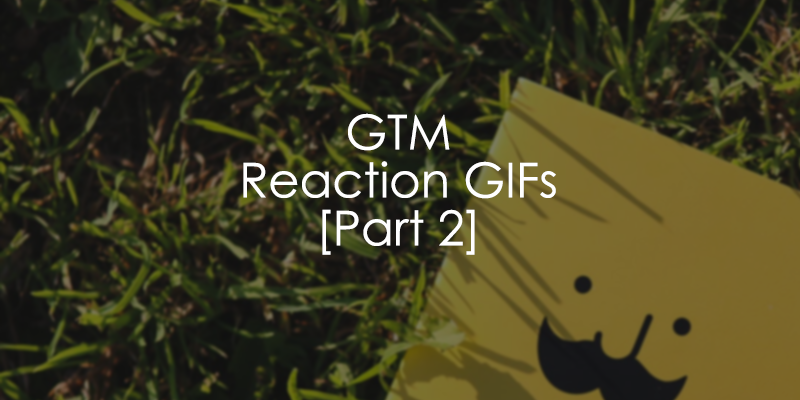 Same time last year, I’ve published a batch of 19 witty Google Tag Manager Reaction GIFs and the response from the community was pretty awesome. So following Holywood’s best practices, I’m turning this into a franchise and today is the day when the 2nd installment goes live. I hope I won’t follow another Holywood’s best practice, posting shitty sequels.

By the way, if you haven’t seen the 1st part yet, go do it first and then come back here, view the Part 1 of GTM Reaction GIFs and the Part 3

4.When I don’t have enough permissions in a GTM container

5. After I implemented Enhanced E-commerce tracking for the first time

8. When I get an error that my GTM container is too heavy

9. When I find a GTM tutorial which looks pretty easy but I still fail at it

10. After you join the Google Tag Manager Facebook community

11. Hey, can you fire an additional event? It will lower the bounce rate.

13. Trying to modify some JavaScript snippet found in a forum (without any JS skills)

14. When Google releases a new feature but only for GTM 360

15. When Preview mode is not working and it turns out that the wrong container is being viewed

18. When a newbie says “Hey, this GTM thing looks like a pretty powerful stuff”

Bonus (not related to GTM but still relevant): When you realize that Google Analytics was launched 13 years ago

All good things must come to an end! But this does not mean the end of the series.

Other posts with GTM reaction GIFs

The comments section is at your service. See you next time in, probably, more serious Google Tag Manager blog post.