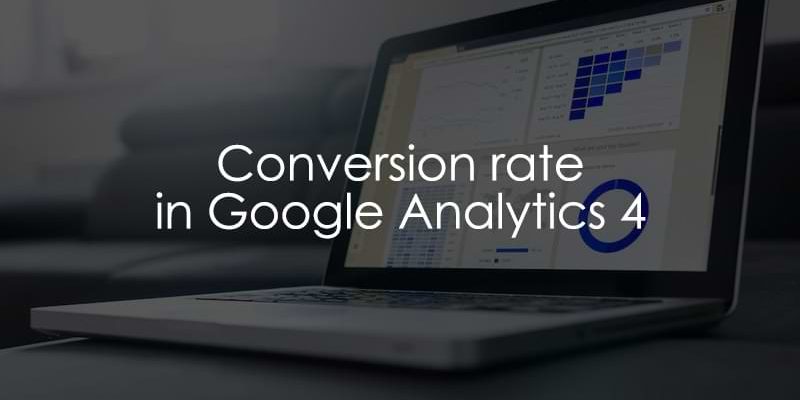 A Guide to Conversion rate in Google Analytics 4

When Google Analytics 4 was introduced, it was missing one very important metric that many people relied on in GA3, conversion rate (CR).

Even though we could see the total number of conversions, that was not enough (because the CR allowed us to see the percentage of sessions that were performing well).

Fortunately, those days are now gone, and we can use conversion rates once again. But beware, there are some changes in GA4, and I will explain them in this blog post.

A conversion is an important action that a visitor/user completes on a site/app. The most popular example is a purchase. Most businesses exist to serve their customers (hopefully) and generate revenue. Therefore, their goal is to generate as many sales (purchases) as possible.

Other examples of conversions can be (but don’t limit yourself just to these):

You can learn more about conversions here.

What is the conversion rate?

In previous Google Analytics versions, the conversion rate was calculated like this:

Sessions with conversions divided by all sessions.

That way, you can know the percentage of how many sessions had a conversion.

But in GA4, there is a welcome upgrade. I will explain that in a moment.

In Google Analytics 4, there are 2 types of conversions:

This metric is calculated by using the following formula:

To understand this concept better, let me give you an example.

Let’s say that we have a user who first came to your website from a Google search, and the next time he/she came from an email newsletter. Traffic sources don’t matter much in this case. In that second session, the user converted.

In total, we have two sessions, and one of them had a conversion.

Then we have a second user who landed on your website from a paid ad (google / cpc) and converted. Then in the next session, the user also converted. In this case, we have two sessions in total and two sessions with conversions.

In total, we had 4 sessions, and 3 of them contained conversions.

But this logic has one flaw.

What if your goal is to convert the visitor/user once? All subsequent sessions/conversions don’t matter to you (but every additional visit still continues to reduce your session conversion rate).

The metric is based on this formula:

Let me explain this metric with a visual example.

A visitor comes to our website from a Google search (google / organic) and then comes back the next day from an email newsletter. None of those sessions had a conversion event. Thus the user conversion rate is 0% because there is one user and 0 users who converted.

A second visitor comes to our website and converts on the first session. Then in the next session, the visitor converts again.

We have 1 user, and that 1 user converted at least once.

If the 2nd visitor comes back to our site once more (but does not complete a conversion event), the user conversion rate will still be 100% for that user (because that user has already converted in the past).

To include conversion rates in standard reports, you will need to customize them.

Go to Reports > Acquisition > Traffic acquisition and click the Pencil icon in the top-right corner.

Then click on Metrics and keep looking for the Session conversion rate. 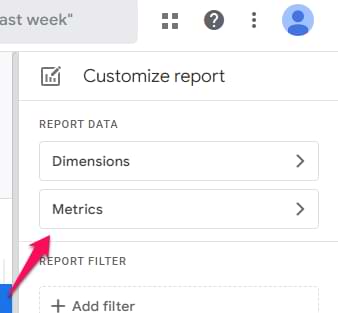 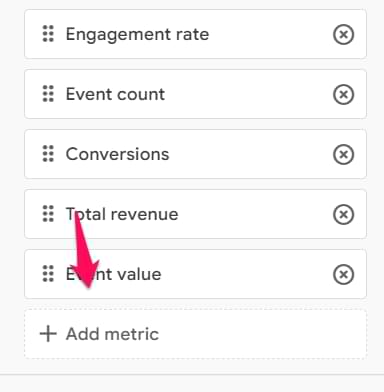 And keep looking for Session conversion rate. Click it and then hit Apply.

Finally, hit Save > Save changes to current report > Save. And that’s it! Now you have the session conversion rate in your traffic acquisition reports (that are session-scoped). 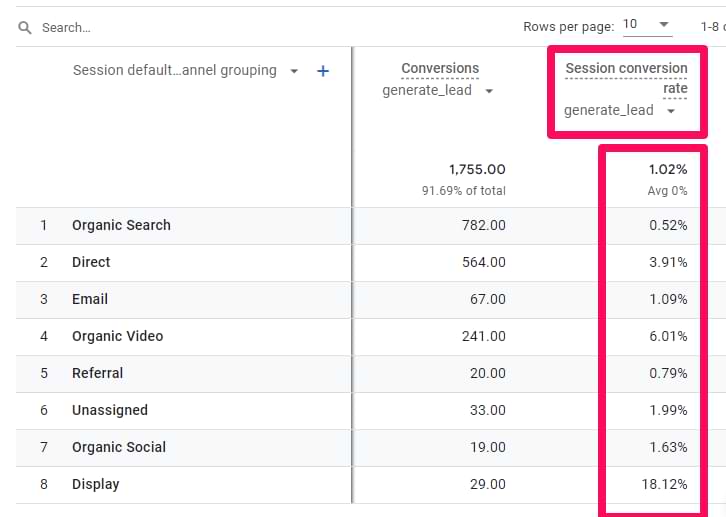 You can even select in the dropdown whether you want to view the CR of all conversions or just a particular event.

The same customization process applies to the User conversion rate.

Build an exploration with conversion rates

Let’s use conversion rate in custom GA4 reports, a.k.a. Explorations. Let’s start with the sessions.

On the left sidebar, go to Explore and click Blank. 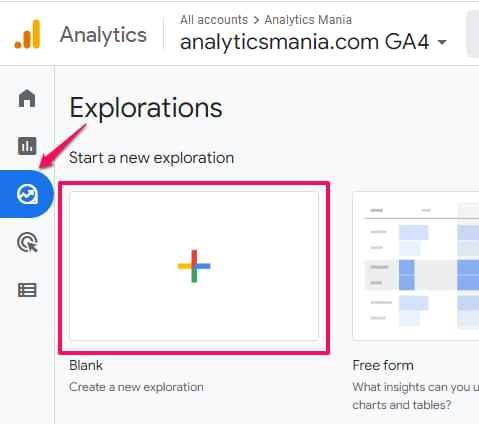 In the Variables column of your Free form exploration, click a plus in the Dimensions section. 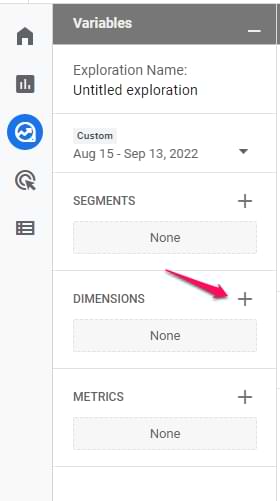 Important: don’t use the regular “Source/medium” dimension. If you want to see data of your *sessions*, you must use a dimension that contains *session* in its title.

Now, click the Plus next to the Metrics and select metrics you want to include in the report, for example, Sessions, Total users, Conversions, Session conversion rate. Click Import. 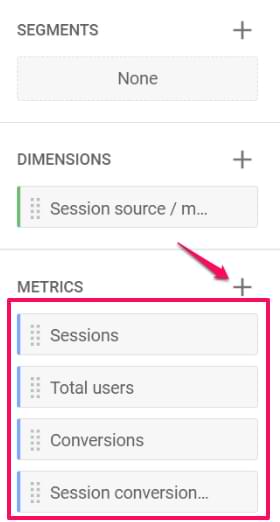 Then drag the Session source / medium to the Rows section and all metrics to Values.

And that’s it! You now see the list of your top-performing sources, mediums, and their conversion rates. 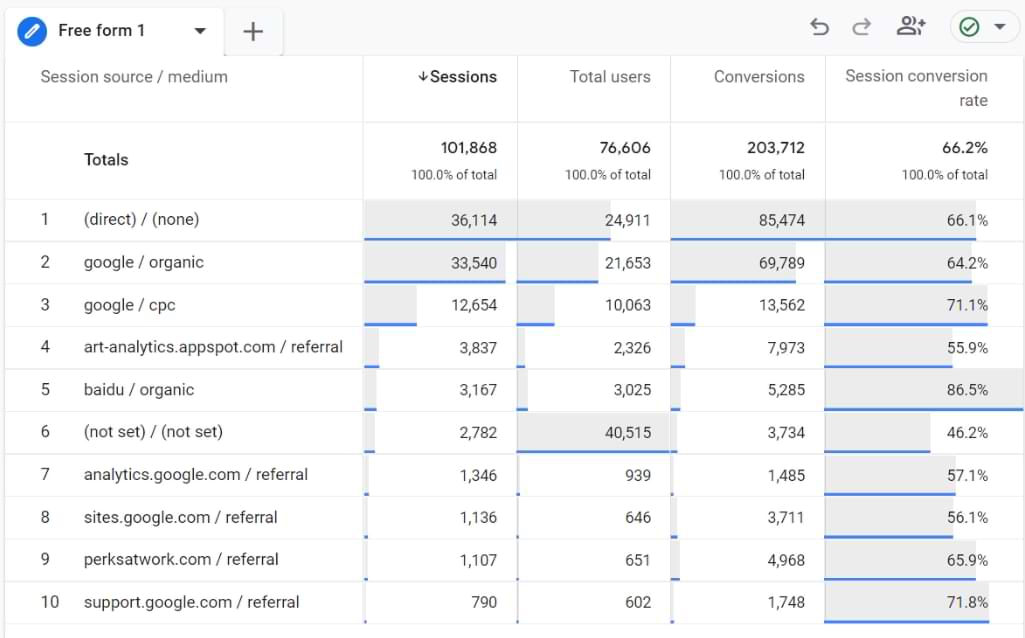 Let’s add one more metric. Click the Plus icon in the Metrics section: 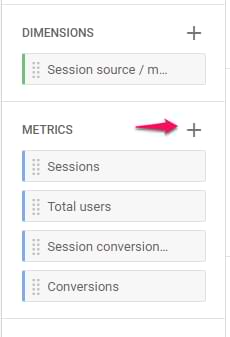 And import User conversion rate. Add it to the report. 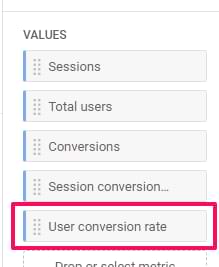 An additional column will appear, and you will notice that this metric is higher compared to the session conversion rate. 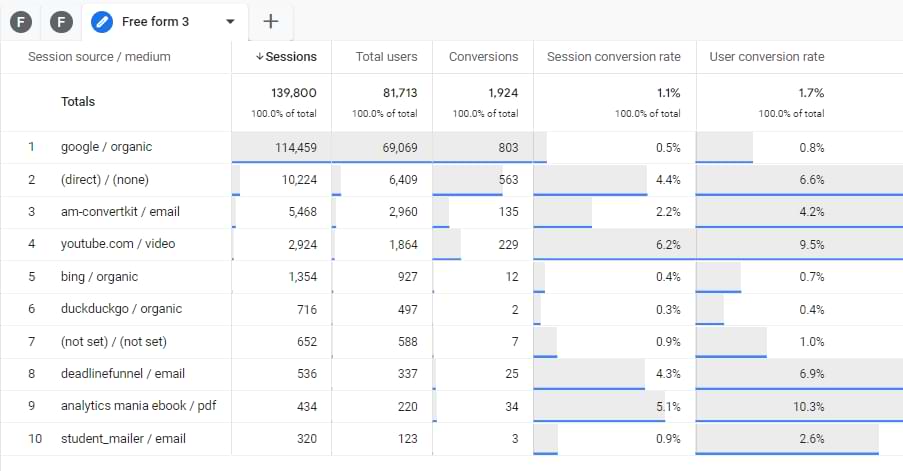 That’s because the User CR checks the number of users who converted. If the same person has converted at least one, it will be included in the calculation. Sessions without conversions of that user are not taken into account.

Conversion rates allow us quickly evaluate the performance of marketing campaigns, channels, mediums, etc. The higher the percentage, the better.

If you are getting a lot of traffic from a particular traffic source, but your conversion metrics are much lower than average, this might indicate an ineffective marketing channel. Unfortunately, it’s impossible to give universal advice on what exactly should be fixed.

But with this metric, at least you know that *something* is wrong with that traffic source and something must be done by a company.

If you want to learn how to analyze conversion data and get insights, take a look at my Google Analytics 4 course, where I focus a lot on that.

Also, I really appreciate the addition of the user CR because working just with the session metric is not efficient.