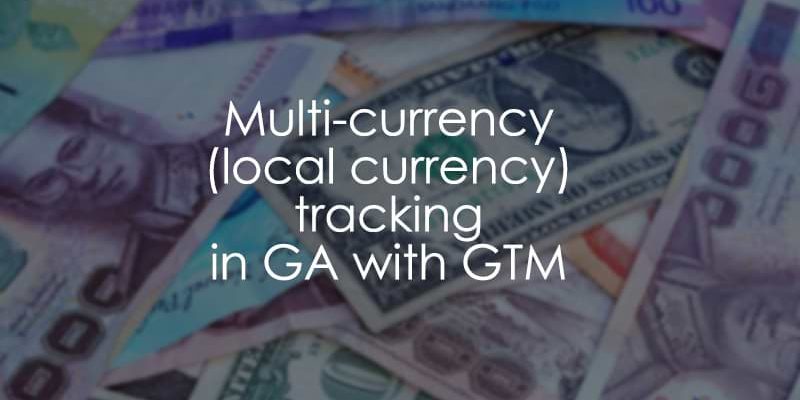 So you’re planning to implement (or are already implementing) Ecommerce tracking in Google Analytics via Google Tag Manager. Some things went smoother, some not so much. In this case, an online store supports multiple currencies meaning that some purchases can be completed in euros, while the rest are in, say, pounds. Google Analytics reports display only one currency so how can you handle that? In this guide, I’ll explain how GA handles data of a business that operates in multiple currencies and how to send that data properly to Google Analytics with the help of Google Tag Manager.

Before we continue: Full guides

If you stumbled upon this blog post without actually being familiar with how to implement Ecommerce tracking in Google Analytics, here are two guides: one for the Standard Ecommerce and one for the Enhanced. Both go in-depth on how to implement these features and make sure that the data is captured properly.

Once you’re more familiar with this topic, continue reading.

Want to learn how to implement Enhanced Ecommerce via GTM? Take a course.

If you want to fully understand how Enhanced Ecommerce implementation via GTM works and how to properly configure it, I have created an Intermediate Google Tag Manager course that contains a module dedicated just to EE. I will take you through the entire process (from planning to preparing a task for a developer and, of course, GTM configuration).

How Google Analytics handles multiple currencies within the same view

Google Analytics E-commerce reports display sales in one currency that is set in View’s settings. 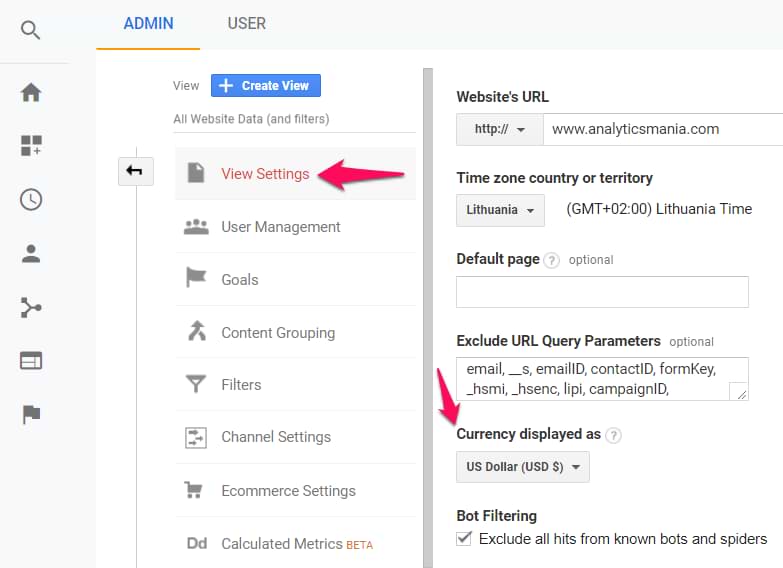 But if we speak only just about a single view, all sales within it are displayed in a single currency.

So what should you do if an online store accepts payments in multiple currencies (e.g. euros and pounds)? Or maybe there are multiple localized branches/e-shops of an e-commerce business that accept payments in local currencies?  Don’t worry, there’s no need to do the currency conversion on your side. Google Analytics can handle that for you.

All you need to do is to send the currency code along with the request to Google Analytics. Then GA will catch it and convert to the currency that you have chosen in your GA View’s settings.

Standard E-commerce tracking via GTM requires you to pass the currency with the field currencyCode. You can do that by editing the Universal Analytics Transaction tag and going to Enable overriding settings in this tag > More Settings > Fields to set and entering the following two things, currencyCode and the variable that contains the value of the actual currency that is used during the transaction.

Keep in mind that in the value column I’ve inserted a variable and it must return an actual currency used in the transaction. The most convenient way to get this variable to work is to ask a developer to push the currency code to the Data Layer and then reading it with the Data Layer Variable.

Notice that I have asked a developer to add an additional parameter currencyCode that contains the currency of the transaction. Keep in mind that the name of this parameter (a.k.a. the key) can be anything you want. Just make sure that you enter the same name in the Data Layer Variable a bit later.

The local currency must be specified in the ISO 4217 standard. Read the Currency Codes Reference document for a complete list of supported conversion currencies. 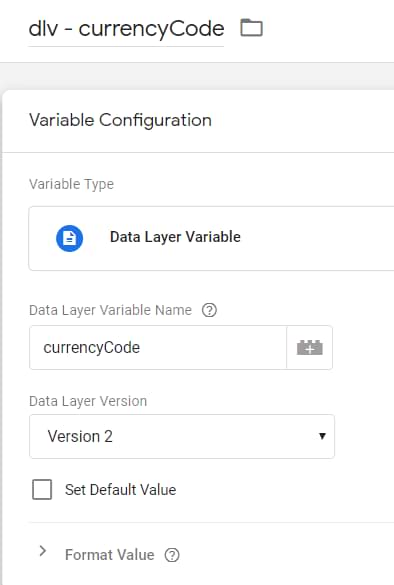 Now insert that variable in the Universal Analytics Transaction tag’s Fields to Set section. You’ll need to override Google Analytics Settings Variable (if you’re using one). It’s important to note that GTM’s autocomplete will not prefill the currencyCode setting, so don’t worry about that. Just make sure you enter it exactly as I did (camel-case).

That’s it! Save the tag, refresh Preview mode and test whether the currency was passed properly, make a purchase with a currency that is different compared to your GA View settings.

There are multiple ways how to test this multi-currency setup but here I’ll mention two:

#1. Enable the GA Debugger Chrome Extension, open the Developer’s Console in your browser and do a purchase. The information of that purchase will be printed to the console and you should be looking for the parameter currencyCode, a.k.a. &cu. 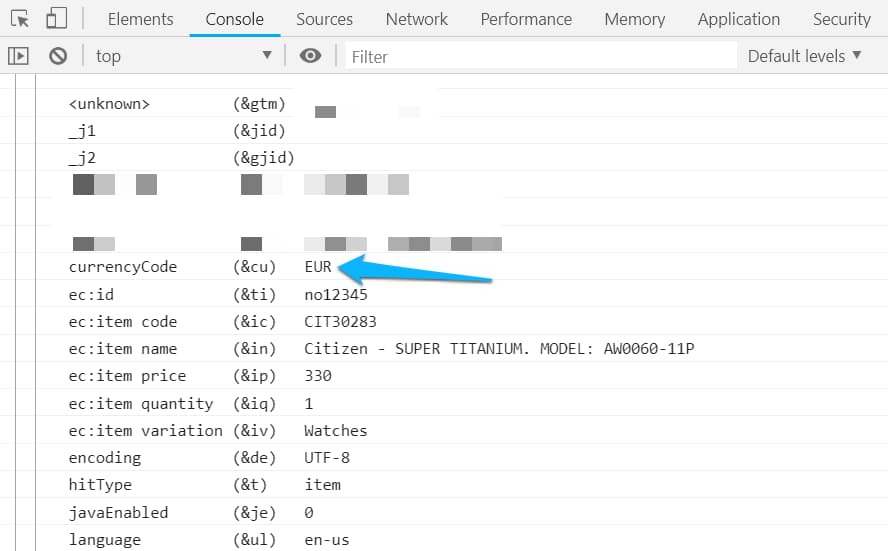 #2. Another place where you should check this sale in Google Analytics E-commerce reports. Unfortunately, sales data is not displayed in the Real-time reports, thus you’ll need to wait for it to appear in the standard reports. This might take up to several hours (depending on the traffic you get). Just don’t forget to choose today’s date in the date picker (by default GA reports exclude today’s data).

One of the easiest ways to validate your data is to locate the Transaction ID of that purchase where you specified currency and check what is the revenue of that transaction. Is it the initial (pre-conversion) value? Or is it the one that is converted? 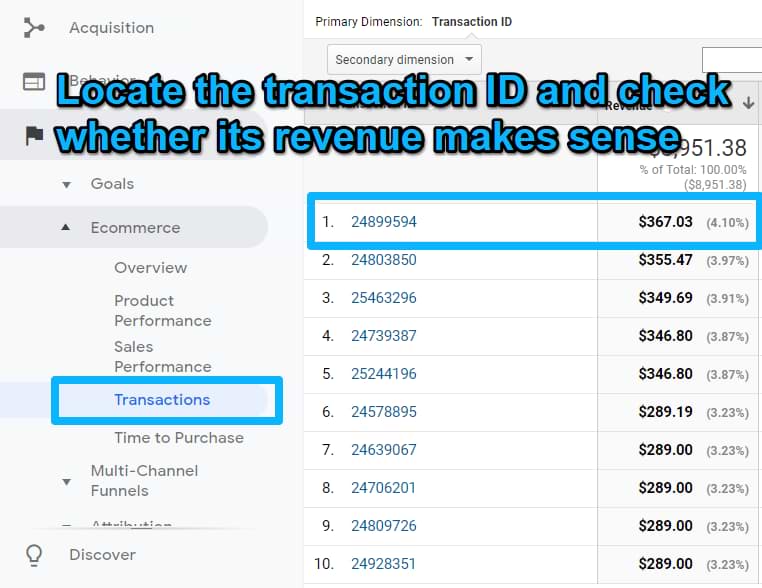 As I have mentioned somewhere above, there are two ways how to pass the Currency Code in the Enhanced E-commerce feature.

Option #1. The first one is exactly the same as it was done with the Standard Ecommerce, use Fields to Set feature and set the currency Data Layer variable as the currencyCode field.

Just ask a developer to push the currency code to the Data Layer, for example, like here (but it can be literally anywhere within that dataLayer.push:

Then create the Data Layer Variable for that currencyCode key and insert it as currencyCode field in the Fields to Set section.

The 2nd option is to ask a developer to add the currencyCode directly to the ecommerce object, like in the code example below: 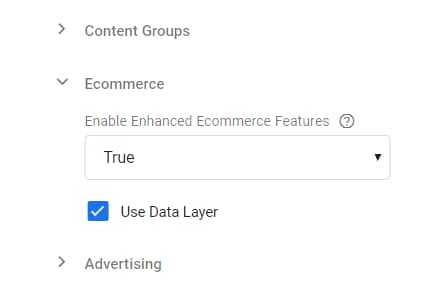 Huh, we’re already at the end of this guide. For some reason, I initially expected it to be longer and I feel like I’ve lost a bit of self-confidence (because, you know, if a blog post is shorter than 2000 words, it’s an amateur’s work 🙂 right?).

Anyway, back to the main topic. If your online store operates in several currencies, you’ll need to do some additional (although minor) configurations in the data you pass to Google Analytics via GTM (but the same principles apply even if GTM is not in the stack).

Here are the key takeaways from multi-currency tracking:

Oh, and one more thing. When you change the currency in the GA View, it will not affect the past data and will only apply to the future E-commerce data. So keep that in mind.

As always, the comments are at your service. Feel free to ask a question about the multi-currency tracking if you have one.