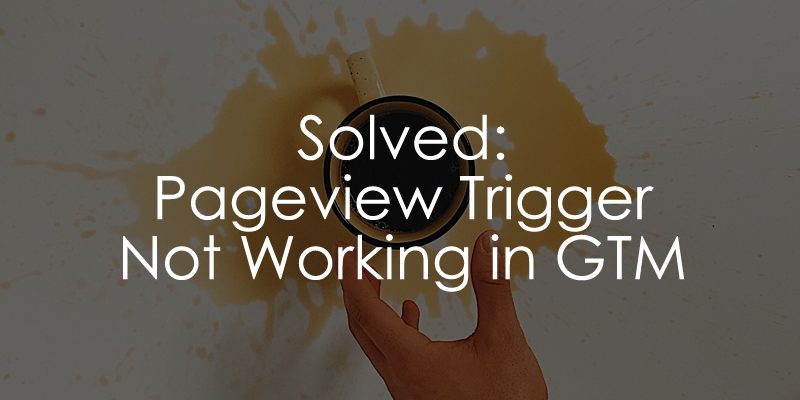 Pageview Trigger not working in GTM? Here’s How You Can Fix It

Update: in June 5th, 2020, the Pageview event was renamed to Container Loaded.

Is the pageview trigger not working in Google Tag Manager for you? I had this problem too and recently a student of mine contacted me regarding the same issue. He told me there was no clear answer on the web so I decided to publish a quick blog post explaining where the problem lies and how to fix it.

Note: the issue described in this blog post is a part of my larger and more comprehensive blog post – Most Common Google Tag Manager Mistakes. Make sure you check it out.

The issue is visible when you open a GTM Preview and Debug mode and reload the page. A P&D console appears, but only two events (instead of 3) appear in it – DOM Ready and Window Loaded. No Pageview. And what is that “Message”?

Why did it happen? Continue reading and you’ll find out.

Since we want to fire our Universal Analytics (or any other) tag as soon as possible, the best trigger is Pageview. DOM ready fires when website’s HTML is rendered and Window Loaded becomes available only when everything else (including Javascript) finishes loading.

If your website loads too long, visitors will abandon your website prior to DOM Ready of Window Loaded events, thus you have to implement web analytics tracking tools by using Pageview trigger.

Every solution starts with an investigation. Check the premise and try to identify the cause of the problem.

When my student asked for help, I opened his website and accessed the browser’s developer tools (in Chrome, go to Menu > More Tools > Developer Tools or click F12).

I was looking for the wrong implementation of dataLayer and saw this:

There are actually two mistakes made by a developer here and I’ll explain them in the next chapter of this blog post.

According to Google’s recommendations, variables (that need to be passed over to dataLayer) must be added to a snippet above GTM container code:

Here’s how it looks in action:

However, I noticed that a number of developers (who have no experience with Google Tag Manager) do not follow Google’s recommendations (or just don’t know that such a thing exists). They implement dataLayer like this:

As a result, this will:

In other words – things will go wrong.

Update: Special thanks to Simo Ahava for mentioning another issue. He recommends using neither dataLayer = [] nor var dataLayer = []. The most robust solution is to implement dataLayer like this:

Now let’s go back to my student’s case.

There are several problems which need to be addressed:

This mistake is also described in my comprehensive guide – Most Common Google Tag Manager Mistakes. It will save you a lot of hassle so don’t forget to check it out.