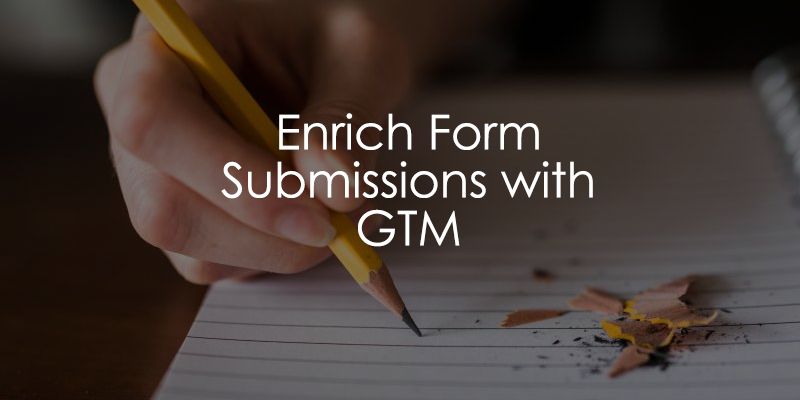 Let’s say that you have a landing page with a signup form. All submissions are stored in the Customer Relationship Management system (CRM). This campaign has been running for a week, and you want to know who filled in the form and what information did they enter. But what about some additional data, e.g. where did this submission come from (what is the traffic source)?

You might say that the CRM you’re using has these additional tracking features. That’s nice, congratulations. But, from my experience, usually, businesses are using some basic form modules/plugins which have only one purpose – capture and store form submissions.

So you try to dig deeper, open Google Analytics, and check conversion reports. Even though you can see how many form submissions happened, you still cannot distinguish the traffic source of individual form submissions.

But that’s not an issue because in today’s blog post, I’ll show you how to enrich form submission data with additional data (not only traffic source). And we’ll do that by….. drumroll please ….. hiding some form fields and prefilling them with Google Tag Manager.

Why is it useful?

The answer’s pretty simple, you get more insights on the individual level because each form submission will have additional fields. As a result, you will be able to export them (I hope that your form module/plugin allows that) to Excel (or Google Sheets, or whatever) and slice the data from different angles.

So what’s the plan?

Keep in mind that your form builder/plugin/module must have the functionality to hide individual form fields. If you’re not sure if it’s possible, do a Google Search: [your form builder name] hidden fields.

In this blog post, I’ll be demonstrating a plugin called Formidable which enables me to hide certain form fields (here’s the solution).

If unfortunately, your form builder cannot hide fields, maybe you could ask a developer to do that. Just keep in mind that all hidden form fields must not be required. We do not want to block the form submission if, for some reason, those fields will not be prefilled.

Requirements for this technique to work

Here’s the case: you’re running an ad campaign that attracts traffic to a particular landing page containing a form. All links which refer to this landing page are tagged with UTM parameters, utm_medium, utm_source, utm_campaign.

It would be awesome to also catch those UTMs and pass with each form submission. How can you do this? Let’s find out.

In your form module, create additional 3 fields (for each UTM parameter). An example could look like this: 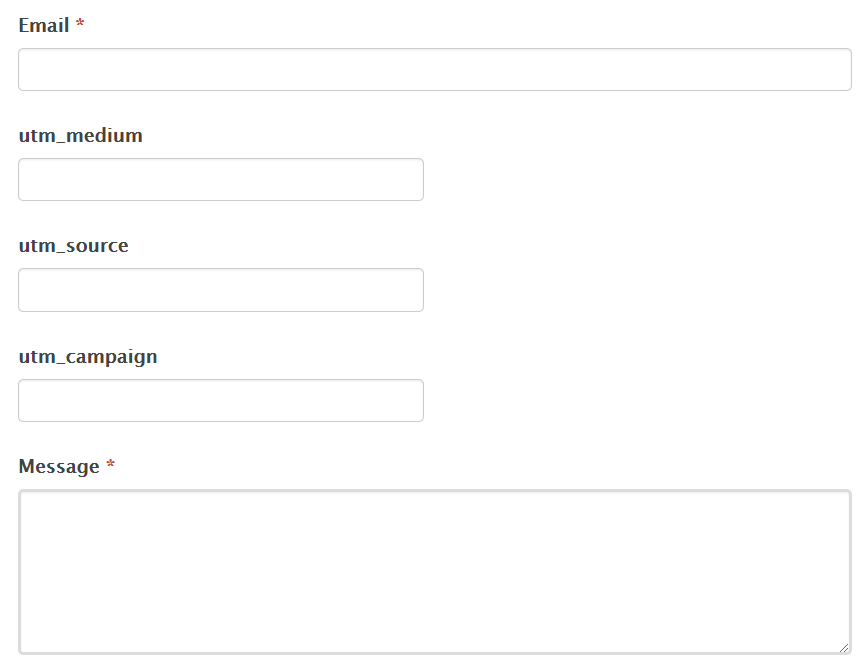 Remember, those three new fields must remain optional. Well, that was easy! Let’s proceed to step #2.

Since those 3 parameters are visible in the URL, we can utilize a built-in GTM variable called URL variable. Go to your Google Tag Manager account > Choose the container > Variables > Hit New (under the user-defined variables) and create three variables with the following settings: 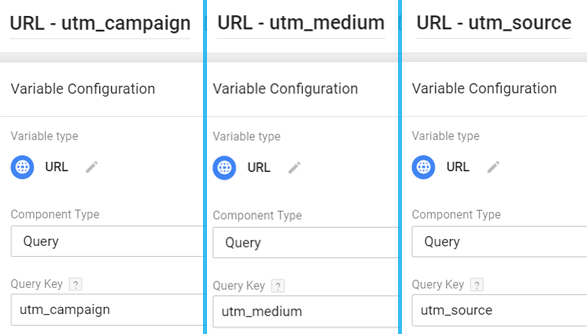 What did just happen now? We taught the GTM to read the URL of the current page, and if it contains utm_campaign, utm_medium or utm_source, they are turned into variables.

For this magic trick, I’ll be using a tiny JavaScript code snippet:

It scans the page and looks for the element with a particular ID (some_id), and once it’s found, the script changes its value to something that we define.

Let’s go back to the form and check those three newly created form fields. Right-click on the first field and hit Inspect. 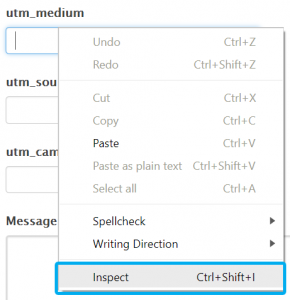 Start looking for the “id” attribute. In my case, the id is field_ftdix.

I will add it to the aforementioned script.

In our example, we’ll be working with three fields. Therefore, one of the possible solutions could be to update the code in order keep looking for 3 fields.

Pardon my limited JavaScript skills. This is probably not the most elegant code, but, on the other hand, it still does the job.

We should still remain in the same function but update it with two new variables and IF statements (for each additional field).

For the 2nd form field, we’ll use the variable el2 and add a condition that checks whether the field exists at all.

And let’s do the same for the 3rd form field.

To sum up what we’ve done so far: I had three form fields (of which IDs are field_ftdix, field_m6qwu, field_o8dcj). The script that we’ve created above will look for each of those form fields. If, say, the first form field exists, its value will be changed to some_value.

Now, onto the final step.

Remember those 3 URL variables which were created in Step #2? Let’s insert them into the script. Instead of some_value you should enter the names of all three URL variables (surrounded by double curly brackets {{}} ).

Now that the script is ready, we need to implement it via Google Tag Manager. Go to Tags > Create > Custom HTML and paste that code. Also, assign a trigger with the following settings: 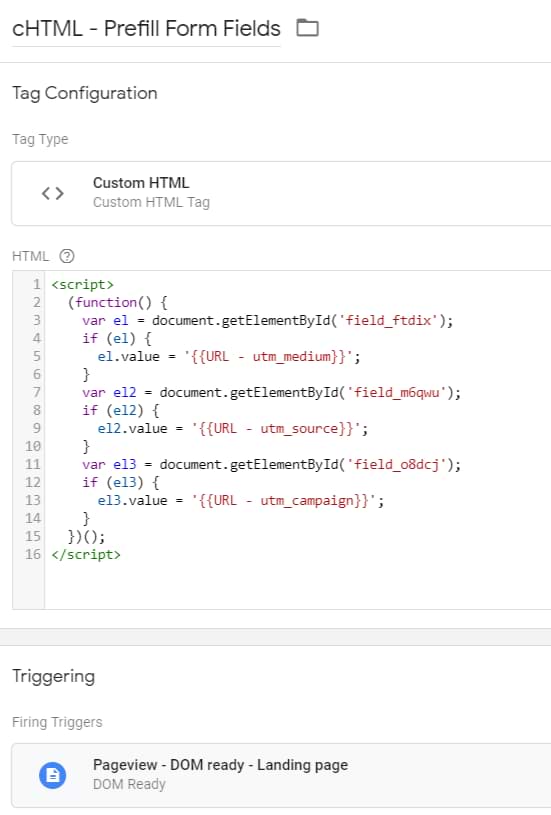 Enable preview and debug mode in GTM, then go to the landing page and refresh the page. A large panel should appear at the bottom of the screen where you can see which tags fired, which didn’t, etc.

First of all, check whether the Custom HTML tag fires only on the particular landing page and not anywhere else. Next, go to the page with that form and see whether all three UTM-related fields are filled in. But before that, you need to fake UTM parameters by adding them to the address bar manually.

Once the page (with those 3 UTM parameters in the address) is reloaded, form fields should be prefilled. Are some of those fields prefilled with undefined? There might be several reasons: 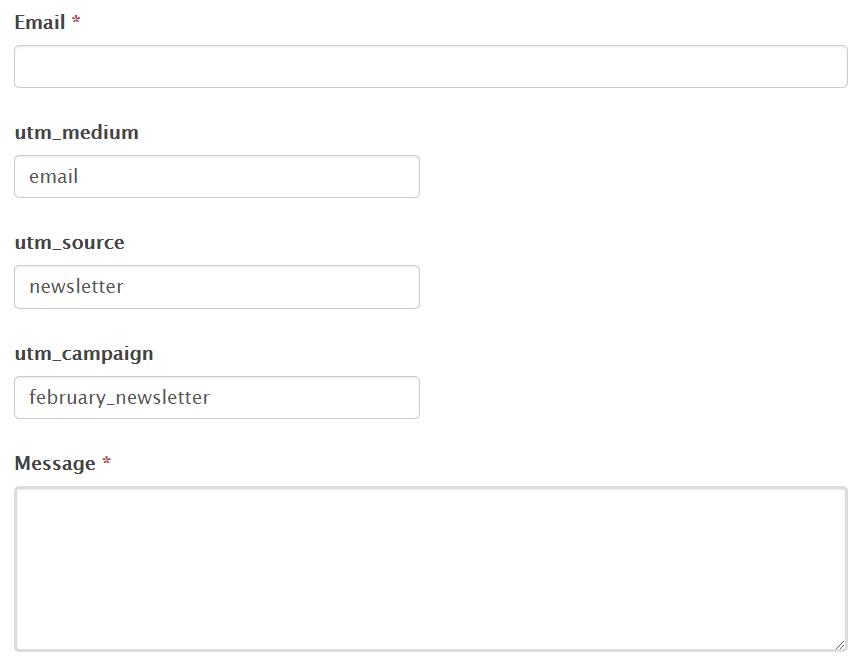 For this step, there is no single effective solution because there is a ton of different forms and landing pages so you need you’ll need to do research on your own. In this blog post, I’m using a Formidable Forms plugin, and they enable me to hide form fields by adding a CSS class frm_hidden to all three fields.

In your case, the solution might be different: maybe there is a checkbox that does it, or maybe you will have to contact a developer if the form is custom-made. The list of possibilities could go on and on, but first, try to google.

Here’s an example of one field’s settings, but I also did the same thing with the other two.

Save the changes and proceed to the final step.

Let’s test everything on a full scale: 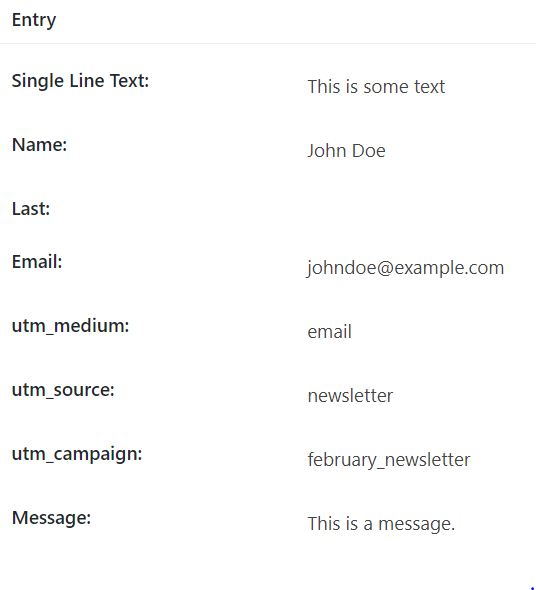 That’s it! Now, you’re officially taken your lead generation tracking to the next level. This should give you more insights from which traffic source each individual submission has been acquired.

Ideas for the future

But don’t limit yourself just to UTM parameters. There might be plenty of other data that you could prefill in the form. Here are several ideas:

Conclusion – How To Enrich Form Submission Data with GTM

Everyone should know that the more fields there are in the form, the fewer people will complete it. But now, with this technique, you are adding some useful and insightful data without giving the burden to the visitor.

The workflow of how to enrich form submission data goes like this: