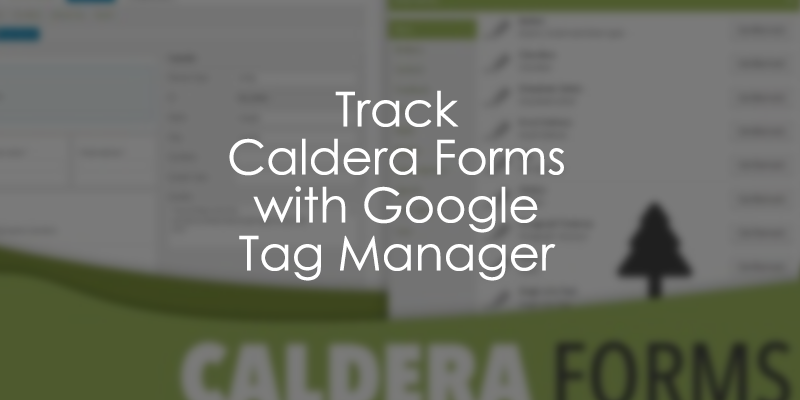 Caldera Forms is a drag and drop, responsive form builder tailored for WordPress. Just like (almost) any other forms, Caldera can be tracked with Google Tag Manager (GTM) and in this blog post, I’ll show you how to do that.

In one of my “Best-selling” blog posts, How to Track Forms with Google Tag Manager, I’ve listed a bunch of techniques you can choose from. If you’re new to the form tracking with GTM, here’s a quick tour.

There’s a s**tload of different forms. Some of them refresh after a successful submission, some of them don’t, some of them might redirect you to a “thank you” page, etc. The main problem with form tracking is that there are no global standards on how forms must be developed. Some developers may prefer one technology (e.g. AJAX) over another – and they have a full right to do so.

In the aforementioned guide, how to track forms with GTM, I’ve listed a workflow which helps you choose the correct form tracking method. In Caldera’s case, I’ll save you some time and give you a hint, you should use AJAX form tracking.

You are probably already familiar with the main Google Tag Manager concept: every interaction you want to track needs a tag and a trigger. If you want to track form submissions with Google Analytics, you’ll need to create a Universal Analytics Tag and a Trigger (rule) when that tag must fire.

Creating a tag is the easy part of this process and we’ll do that later. First, let’s see how can we distinguish a successful Caldera Form submission.

Lunametrics have published a code of an awesome AJAX listener that everyone can use for free. It listens to all AJAX events on a website and pushes them to the Data Layer. What does it mean? Well, whenever a form is submitted successfully, we will be able to catch its AJAX response and turn it into a trigger.

Here’s the code of AJAX listener. Copy it and paste into a Custom HTML tag in Google Tag Manager.

After you installed the AJAX listener via Custom HTML Tag, check whether it’s recognizing AJAX responses made by a Caldera Form submission:

In Preview and Debug mode, click the latest ajaxComplete event which occurred after you submitted the form, then navigate to the Data Layer tab: 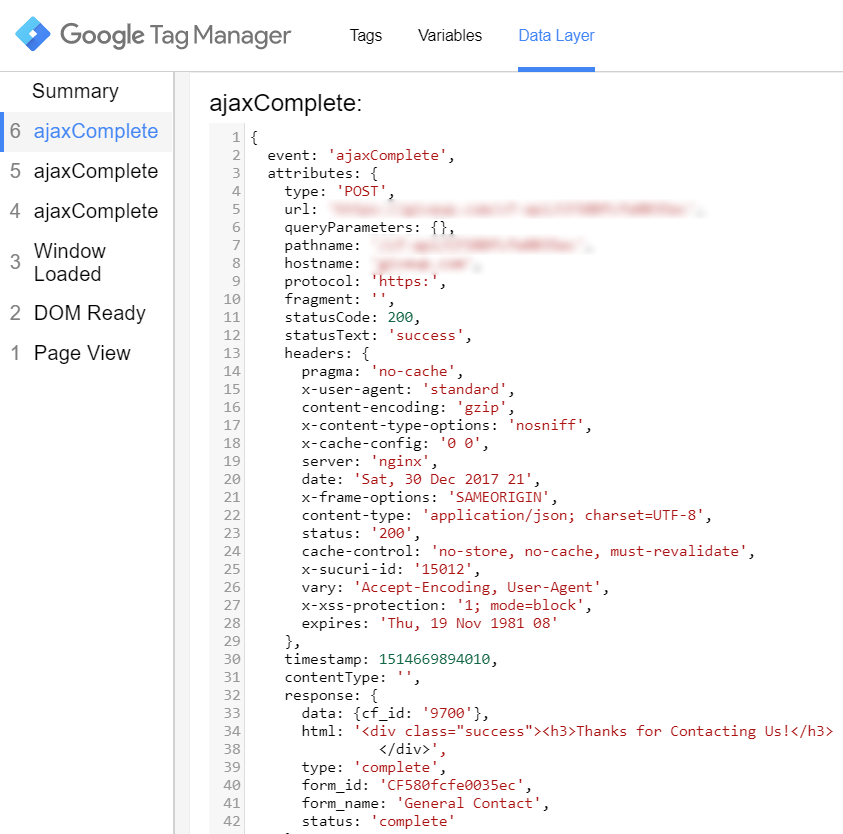 Looks difficult for a non-developer, right? But it’s easier than you think. This is the data that was passed to the Data Layer after a successful form submission, each line is a separate dataLayer data point which can be used as a dataLayer variable in GTM. You should be looking for something which helps identify successful form submission. Scroll down and look for “response”.

Let’s take a closer look at it. Can you see the message Thanks for Contacting Us? Bingo! We can use it as a variable in a trigger. P.S. Keep in mind that the text might be different in your case.

Create a variable and trigger

By default, Google Tag Manager does not recognize the data in the Data Layer, meaning, that you cannot use it as variables until you actually create a variable. Let’s do that. 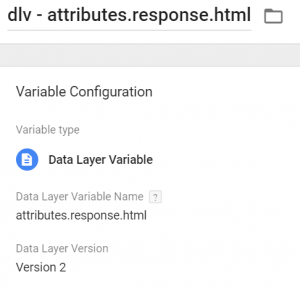 You’re probably guessing why I entered attributes.response.html as Data Layer Variable Name. Let’s take a closer look at the Data Layer in Preview and Debug mode. In line 2, you can see the event name, ajaxComplete, that’s the same name which appears in Preview and Debug console’s left side. Then, in line 3, we see attributes which is an object with various data points (response is one of them).

If we go one level deeper, we’ll see that response also contains another object with even more attributes, such as data, html, type, etc. 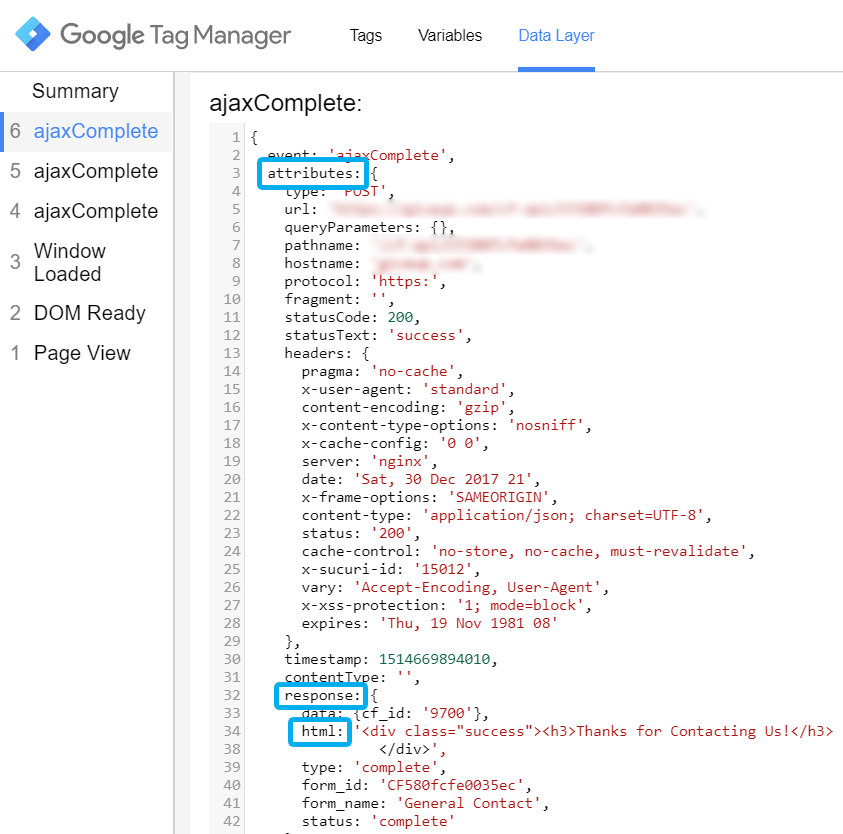 So when we want to tell Google Tag Manager that we are interested in html attribute’s value, we need to tell the exact path to that data. In our case, it’s attributes → response → html. Each level of the path must be separated with a dot → attributes.response.html. Another example: let’s say you’re interested in Server data (from that very exact AJAX response). In that case, Data Layer Variable’s Name should be attributes.headers.server .

After we created an attributes.response.html Data Layer variable in Google Tag Manager, let’s debug. Refresh Preview and Debug mode and refresh the page where the Caldera Form is embedded. Fill it and submit. Click the most recent ajaxComplete event in Preview and Debug console, then navigate to Variables tab and find your new variable dlv – attributes.response.html. If you did everything correctly, it should look like this:

Ignore the style of that value, it might look different in your case. Since the html attribute contains an actual HTML code, it might look goofy in the Preview and Debug mode. But that is not a problem for us, we just want to track the form, right?

Let’s go back to the value of the attributes.response.html variable. It contains a success message of a submitted form. If the value of that variable is undefined, then you should start looking for mistakes. Most common ones are typos in the variable name or inaccurately defined variable’s path. Some guys just try using response instead of attributes.response. If you’re still facing issues, read the guide How To Access Data In The Data Layer.

Now let’s create a trigger which fires when the event is ajaxComplete AND our new dataLayer variable contains text The message has been successfully sent.

What I really liked about Caldera forms, is that they return more data about the form with their AJAX responses. Let’s go back to the GTM Preview and Debug mode and check that AJAX response data one more time.

See anything useful? What about form_id and form_name? Why don’t we pass them to Google Analytics as well? Another reason why this data is useful is multiple forms on one page.

If you have two or more Caldera Forms on one page, you might want to distinguish them. How can we do that? By creating more Data Layer Variables, of course! 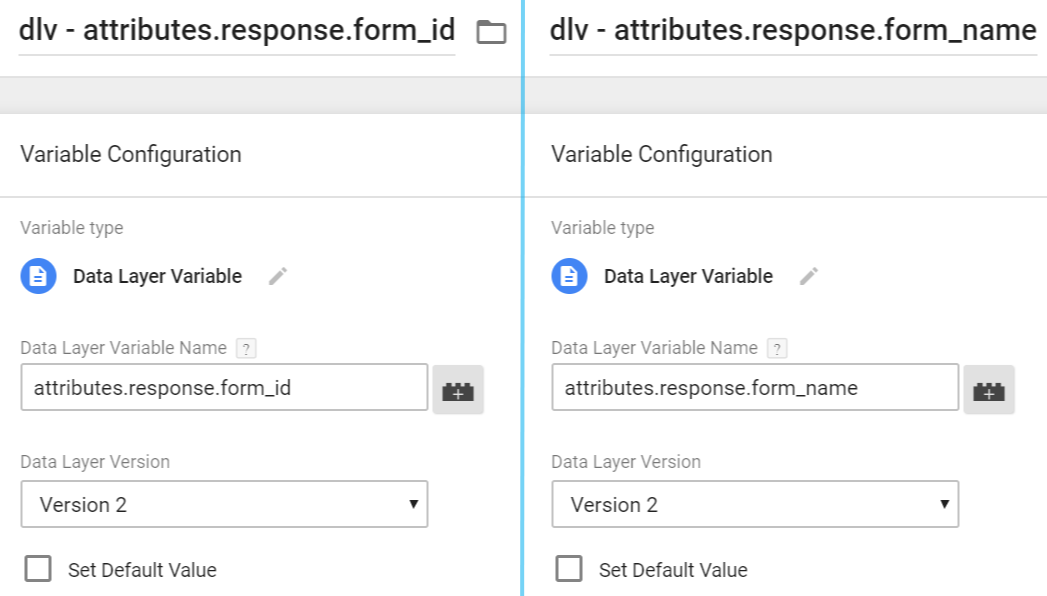 Okay, the hardest part is complete. Let’s move to the final step. 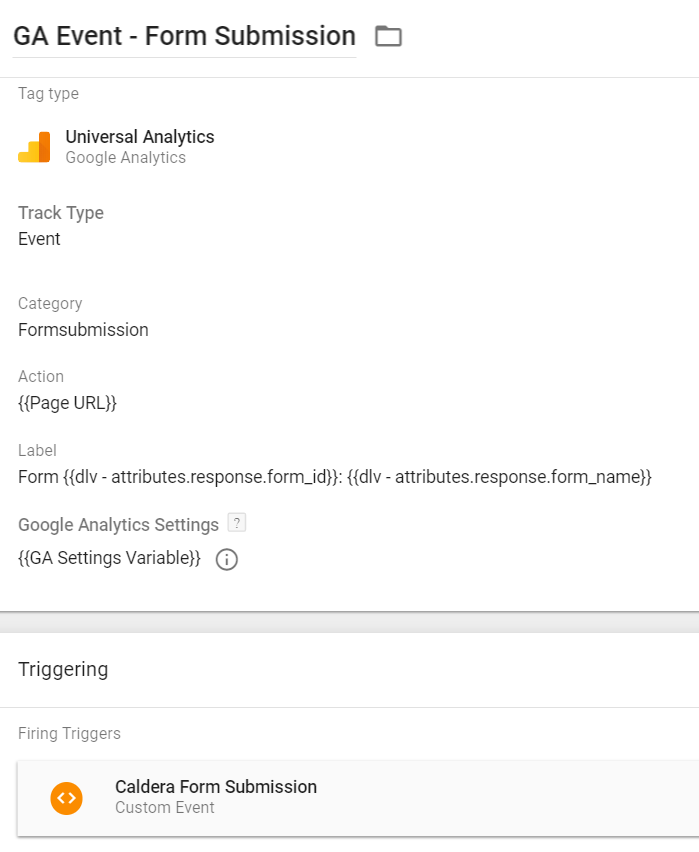 So what happens after the form is successfully submitted? Google Tag Manager will dispatch a Google Analytics event which contains the following data (variables will be dynamically replaced with the actual form data):

How to track Caldera Forms with Google Tag Manager

Another form tracking guide has come to an end. In this blog post, I’ve explained how you can track Caldera forms with Google Tag Manager. AJAX, as a technology, is very popular among form developers, and Caldera Forms is no exception.

Here’s the summary of the process you need to follow in order to track AJAX responses of Caldera Forms:

Did I miss anything regarding how to track Caldera forms with Google Tag Manager? Let me know in the comments!